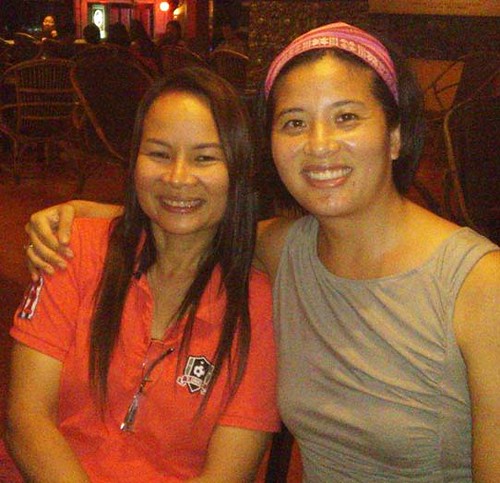 Last night I was very happy to reunite with my Thai friend Sudjai Sudjai in Siem Reap. I first met Sudjai back in January this year when my friend and I took the wrong bus and went 8 hours in the wrong direction. We meant to go to Koh Surin island south of Thailand but who knew that there was also a Surin City going up north. Read that full story here.

We arrived at Surin at 5:00 a.m. and had to wait 14 hours for the next bus. Thankfully the was a coffee shop by the station with Wi-Fi so we hung out there for most of the day.

We started chatting with Sudjai, her husband and their friends and we found out she spoke fluent Khmer (Cambodian) and they were so kind to spend probably 8 hours with us at the coffee shop! They even drove us to the night market, gave us a tour and helped us order our dinner food. They kindly stayed with us right until we got on the night bus and said next time we come to Surin, we can stay with them.

Last night in Siem Reap, we went out for Khmer food, walked around the night market, saw a traditional dance show and got a massage while we watched the ladyboy show. As I walked Sudjai and her friend back to her guesthouse, she kindly said, “Next time you are in Surin you can stay with us. We have an extra room.”

Tonight is our last night together and we’re going to the weekly jazz show at Heritage Hotel. 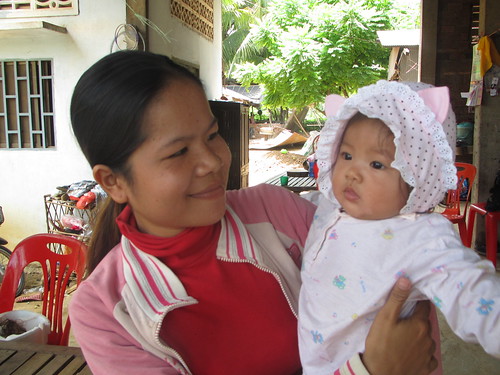 My friend’s sister and her adorable daughter in Banteay Meanchey province, Cambodia.

Ok I’m two days late for posting on Blog Action Day on the topic of inequality. When I read the announcement of the topic “inequality.” The very first thing that came into my head was, “women.”

I’ve been fortunate to grow up in Vancouver, Canada where, for the most part, I haven’t felt deprived of opportunities because I’m a woman. Yes of course there is still discrimination on Canada in terms of pay and I have been underestimated at times because I’m a girl.

I grew up mostly playing with boys because I enjoyed sports. When I was 10, almost all of the girls would chat during our school breaks while the boys played football or rugby. I always thought that was much more fun than just talking. Guys would often be embarrassed when I would kick their ass they their friends would tease them that they got beat by a “girl.” To which I would then reply, “Girls are good too.”

I always believed in women’s rights to choose any career they want, have the freedom to live a lifestyle they choose, study whatever they’d like and have the choice to not get married or have kids if they so please. And after living in Asia for a year and being in my home island-country Mauritius in Southeast Africa, I have never felt more passionately about empowering women and wanting every woman to have equal rights to men around the world.

After spending time in cities and remote villages in Laos and Cambodia, my blood boils when I see and hear so many stories of women who have no say when they get married, particularly when they are only 13 to 20 years old. In Laos, women often stop their schooling once they are married and have no say in their marriage or lives. They are slaves to the country’s customs.

In Cambodia, one of my friends works incredibly hard for her money and to support her family to the point where she has no savings for herself. But she really wanted to buy a sexy 125 cc motorcycle. But in Cambodia, “good Cambodian girls” don’t ride motorcycles because they look like a “gangster” or it’s not ladylike. She told me how so many people discouraged her from buying it and I told her, “That is even more reason for you to get it. Show them you can get it.” She said, “I work hard for me money and I want to buy it for myself.”

I’m very happy that she has been sporting her bike the past year. When people like her start to willingly dismiss old mentalities, this is where change happens.

Communities would absolutely crumble without all of the work women do for the house, children and their families. They give so selflessly, whether it’s voluntary or not, and expect very little in return. And what’s sad, however, is often women themselves pass on these old customs to their children and the cycle of inequality continues. The women demand so little of their husbands to help around the house instead of spending most of their time drinking, smoking and waiting to be served.

However, it’s interesting being in Siem Reap and seeing what’s happening in Cambodia with this next generation. Some of my female friends are incredibly driven and value education and they will pass that on to their own children. This is where change happens.

I’m not trying to sound like a man-hater because I’m not. I have been so grateful to meet the unique, unfortunately, a minority of men, who do domestic work, cook for their families and take good care of their kids. I’ve met many genuine and gentle men who have such great characters and are great models for how men should be and act around women.

So my wish for women and men around the world is that they are able to go to school, determine their own destiny, stand up freely against injustice and be able to choose the life they want to live. 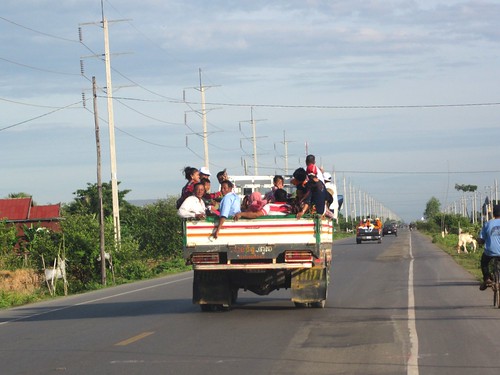 I always run into inspiring, hardworking and passionate people in Cambodia through friends and often by accident. Whether I’m talking to a friend who works at a hotel or someone off the street, in a short time they are very open telling me about their past struggles in a very casual tone. I’m always inspired and surprised by their modesty despite and persistence to push on in life to achieve their goals.

I’ve recently met a quiet, well-mannered and very helpful 22-year-old Cambodian man. When I asked him if he lived with his family he said:

“My father left me when I was a baby. I have never seen his face. My mother has been working in Thailand she is still in Thailand working in a factory. I grew up with my grandma.

When I went to visit my mom, I didn’t have a passport so they put me in prison for two days. They gave me little food and just a bit of rice. It was a good experience.”

Here is when I interrupted him and said, “It was a good experience?! Why is that?” He responded:

“It was a good experience because I learned something. I experience the good and hard times. When I was 14 and 15 I stayed in an orphanage. I learned how to be on my own and do things for myself.

I went to the Paul DuBrule tourism school. Someone I knew paid for my classes and I always wanted to learn. My mom said don’t go to school just work but I wanted to keep studying.

When I was a small boy, I listened to the foreigners and I always wanted to learn English. So I taught myself a lot.

I had a very hard time when I was working in Thailand. I worked from 11 p.m. to 11 a.m. the next day. When I came back to Cambodia I was the only one in my group to get a job after leaving Thailand.

I always feel like I get a second change and third chance. I feel very lucky.”

I told him that is a very inspiring attitude to have despite very difficult times and so many Western people complain about very insignificant things. It’s stories like these that is a huge reality check and make me put things in perspective whenever I feel the temptation to complain about petty things.

He has a very calm energy and doesn’t let his past affect his passion for learning and pushing through life. I hope to meet him again soon. 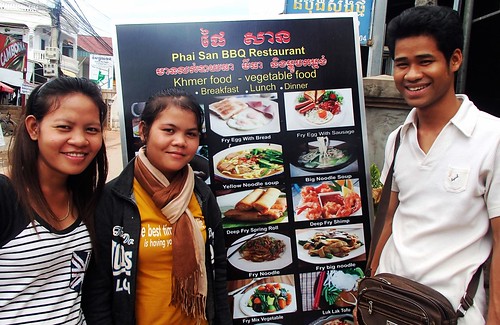 I first met my friends Phai and San, who are married, in 2013 when their restaurant was next to 9 other restaurants by Sivatha Road in SIem Reap. After ignoring all of the people who were hollaring for tourists to eat at their restaurants, my friend and I finally caved and decided to try Phai San. And we have been good friends ever since.

Not only is all of their food delicious at amazing prices (between $1.25 to $3.00 US), the couple is extremely generous and hospitable with their staff and guests. Phai San also happens to make my favourite stir-fried vegetable yellow noodle and I find it tastier than anywhere else I’ve been around Cambodia.

I was surprised when Phai told me that even when he is not making a profit, he pays his staff double the average Cambodian salary because he wants to give them a fair wage. He said, “One of my staff is having baby, so I want to pay her more.” When they invited me to their home town south of Cambodia, of course I didn’t expect them to pay any of my costs. But they offered to pay for my boat ride to San’s village, which I was very touched by. I spent three days with their family who hosted me so generously.

I’m always happy to support local Cambodian businesses that provide great service, delicious food and are run by very honourable people. If you’ve had a good experience at their restaurant, please write a review on Trip Advisor.

While my friend was visiting Laos recently, she kindly bought this necklace for me. I loved the design and I didn’t immediately realized the inspiring story behind this beautifully crafted jewelry in the shape of a dove.

People who reside in Ban Na Phia village were taught how to use the very bombs that destroyed their lives during war into spoons and bracelets. Their crafts generate income and transform what used to be a deadly weapon into a symbol of peace. 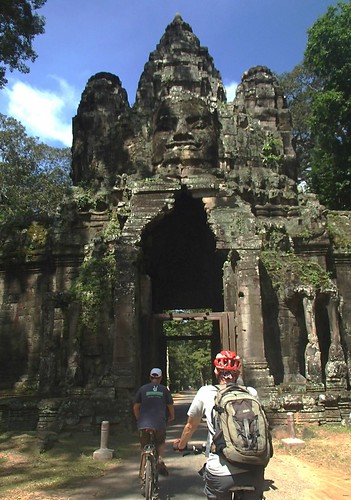 I love joining the weekly bike rides in Siem Reap. Every Saturday morning at 8:00 a.m., anyone can join the group in front of the Grasshopper Adventure‘s office close to river and across Peace Cafe. Different people take turns leading the ride, which usually lasts between two to three hours depending how far people go. Whether 2 or 20 people join, the group goes rain or shine.

Going along the walls of the Angkor Wat area is one of my favourite routes and we did just that last weekend. During the rainy season from May to November, sometimes we go on some pretty muddy treks and have to carry our bicycles across the water. But that’s all part of the adventure.

The cheapest places I’ve found for a mountain bike rental for a whole day is $3 US at a bike shop on Sivatha Road within a block of X bar on the same side towards the direction of the roundabout. To avoid handing my passport, I just tell them that my passport is in Phnom Penh on a Visa extension. But they’re trustworthy, I wouldn’t worry about scams at this shop. 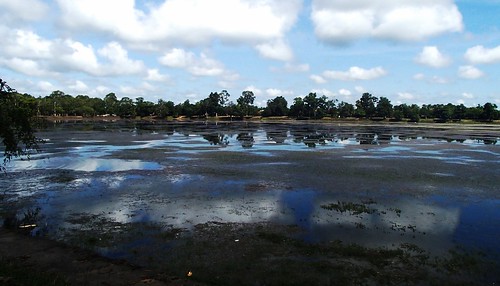 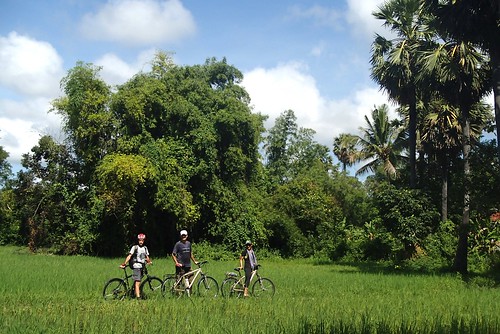 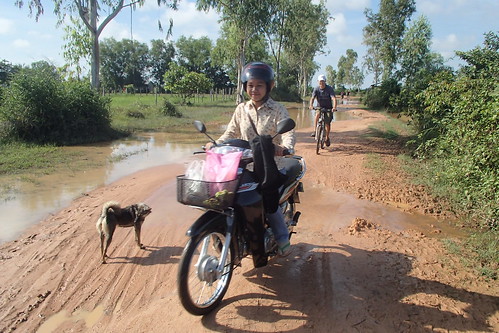 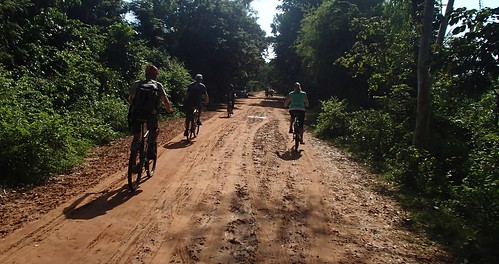 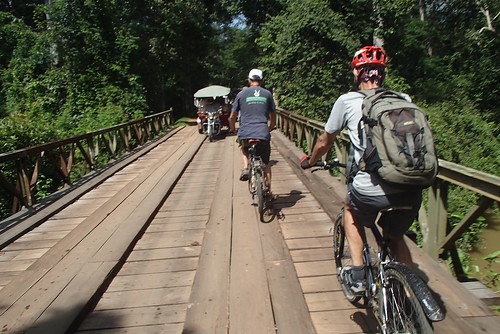 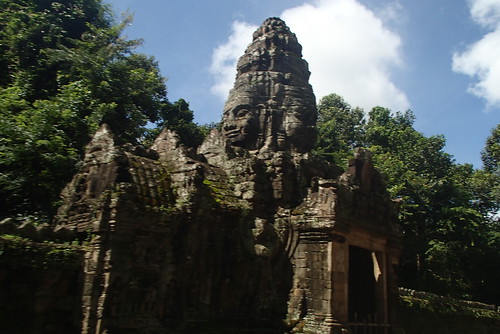