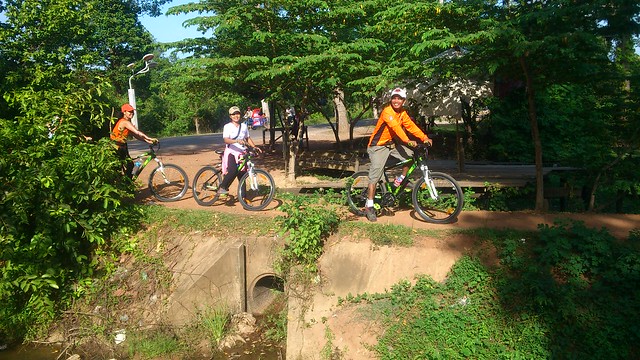 I’m incredibly lucky to not only be living in Siem Reap, just 8 km away from the Angkor Wat complex, but having amazing Khmer (Cambodian) friends who often lead us through beautiful bike rides in the jungle.

I haven’t paid the US $20 entry fee to get into the Angkor complex most of the times I’ve gone because most people can get in the area, not the temples, if you come in through the jungle, often by bike. 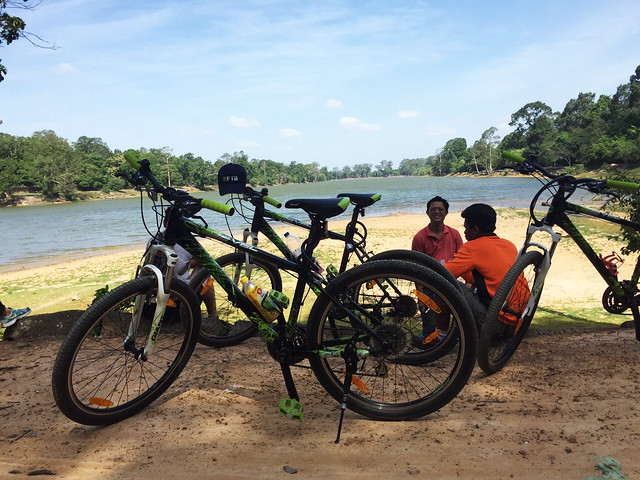 We planned to meet at 7 a.m. at our friend Dara’s restaurant for breakfast and he got his staff to prepare rice soup for us. When I asked how much the bill was he said, “No problem, we just enjoy together.” Such typical Cambodian hospitality.

I recruited two Western people I met to join the ride. The day before I warned them, “I’ll be honest with you, for the ride tomorrow, I don’t know if we’ll ride 20 km or 60 km in the day. All I know is we’re meeting at 7 a.m. and I’m just going to follow them.” 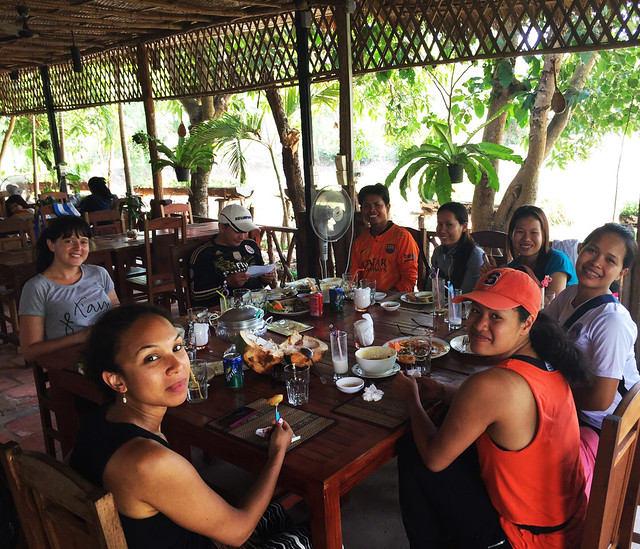 We were about 10 people in our group and no one really knew the way through the jungle routes, but Dara seemed to know where he was going. The weather was perfect and we went on beautiful routes around the complex and had a wonderful lunch at one of Dara’s friends’ restaurants. He was nice to give us 50% off of the menu items.

The Cambodian food was delicious and was well-deserved after riding for so long. All of our Cambodian friends have much more stamina than us and could keep riding for a long time. This kind of guided bike ride would cost someone at least US $60 a day to join a tour.

The whole day was beautiful, adventured and filled with fantastic company. One thing I noticed after spending 2.5 years in Cambodia is Khmer people are very patient and flexible when there is someone in the group who is a bit delayed or need to stop for something, many Western people, including myself, would get easily annoyed and impatient. But they are so even tempered and easygoing. 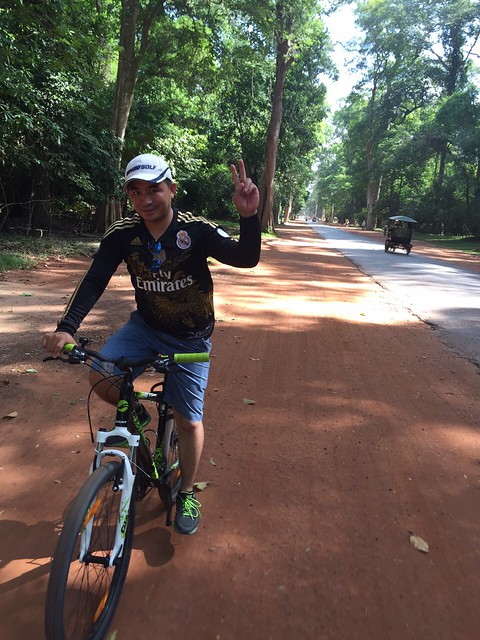 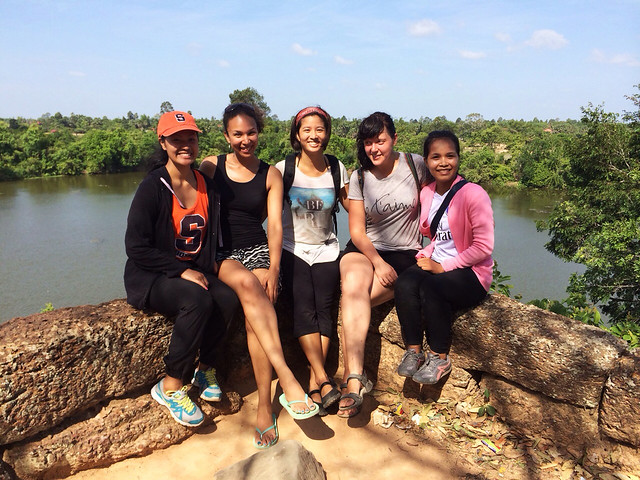 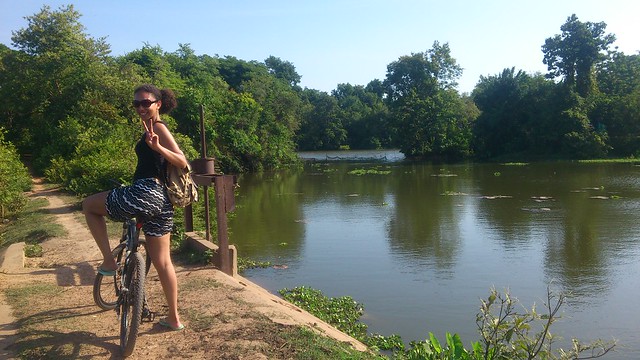 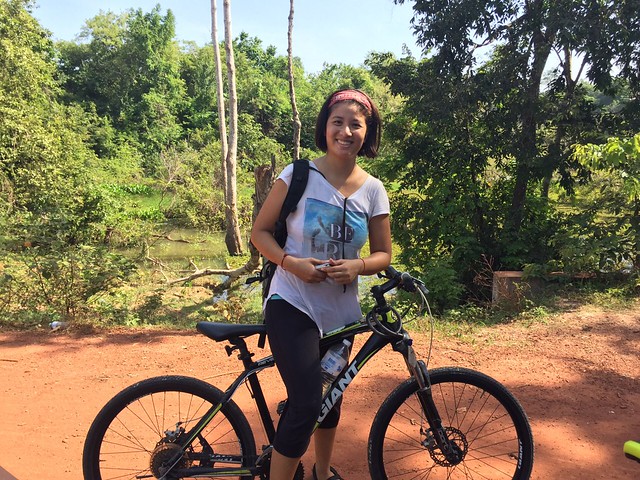 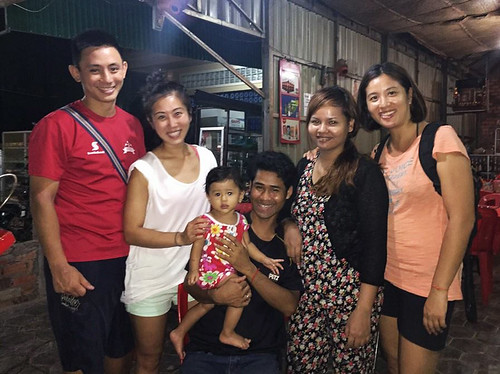 My great friend Eunice from Vancouver came with her husband Nate to Siem Reap in July to visit me.

I have been friends with Eunice for a few years now and I felt horrible for missing their wedding in May because I was leading a group trip that month. So I was very happy that they took the time during their holiday to come to Cambodia for the first time. 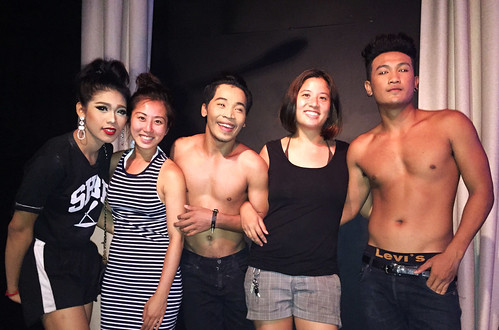 They joined me at my favourite weekly hangout watching the ladyboys at Station Wine Bar in Siem Reap.

To be honest, I didn’t know how our connection would be after I’ve been away from Vancouver for 2.5 years and I saw her just one time in September when I went back to visit friends and family.

Every traveler I’ve spoken with has had a hard time adjusting back to their home country and I felt the strong connection I once had with some friends was lost when I went back to visit. 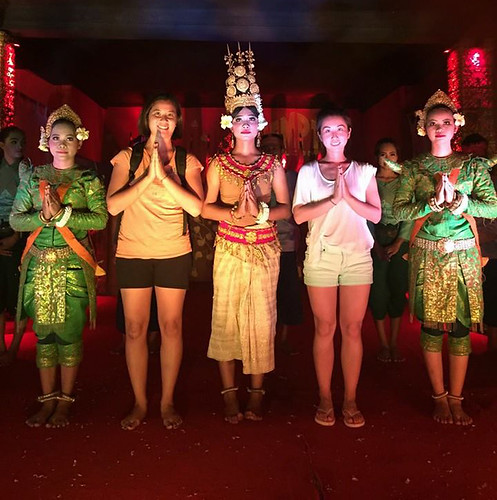 We saw a traditional dance show on their first night in town.

I was a bit nervous because Eunice had never been to a developing country before and they had just spent time in Singapore with their family, a completely different environment and place from Cambodia. I thought they may be uncomfortable in Siem Reap and have to adjust to so many differences from Vancouver and Singapore.

But it ended up being an amazing time with them and I’m so happy they enjoyed it. They were extremely easygoing, very polite with my friends and just went with the flow. We went to see a traditional dance show, eat at my favourite street food restaurants, see a ladyboy show, and traveled to Phnom Penh together. 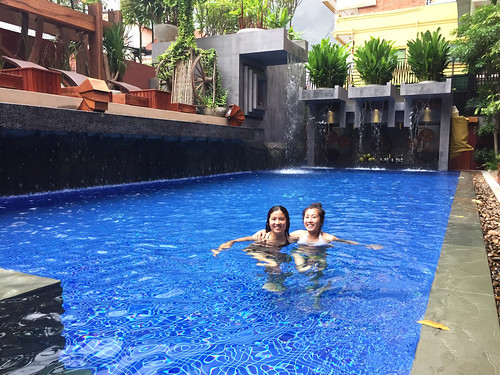 At my favourite pool in Siem Reap exclusively for hotel guests. They got full VIP treatment. Thanks to my wonderful Cambodian friend for giving us access.

The day before we went to Phnom Penh, my friend was so kind to let us use the four-star hotel pool that is normally reserved for their guests who pay US $85 to US $220 a night. But because it was about to rain, not many people were swimming and we enjoyed a poolside cocktail, tea and enjoyed swimming in the rain.

I’ve appreciated and loved everyone who has made time to visit me and experience my world in Siem Reap. 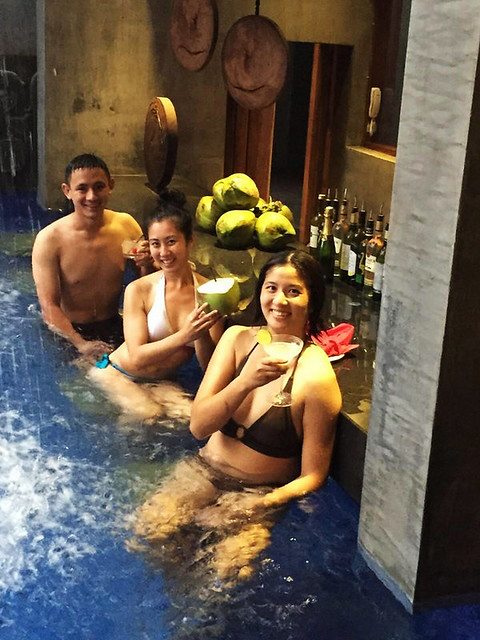 Taking full advantage of a drink at the poolside bar. 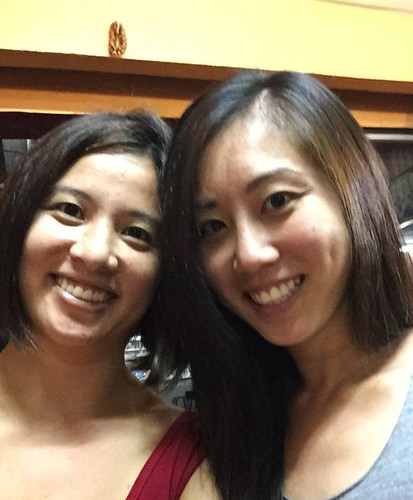 Feeling fresh after our US $2 Cambodian hair wash, head massage and straightening. 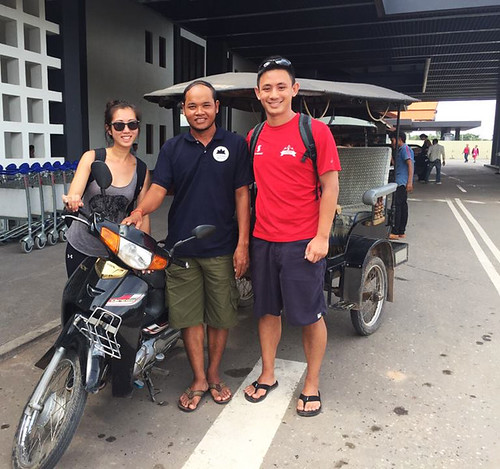 Eunice and Nate met my friend and number 1 tuk tuk driver Somroeun and his family the day they returned back in Singapore. 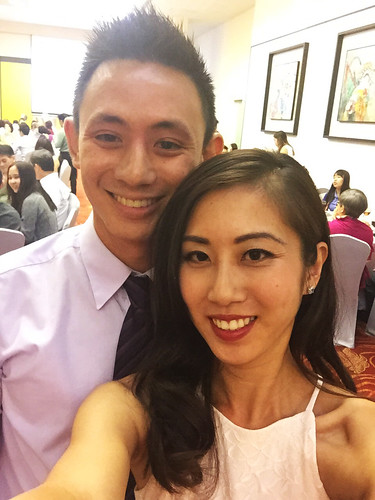 Nate and Eunice looking glamorous again at a post-wedding dinner celebration in Singapore with their family. 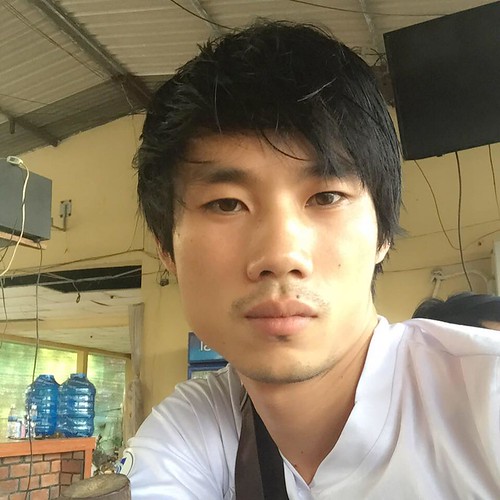 I prided myself in being able to say that I never locked my bicycle in Siem Reap for two years and never had a problem. I’ve left it outside on the busy streets of the Old Market almost every day while I bought groceries and outside restaurants.

One time when my friend and I decided to go dancing late, I left my bike unlocked next to her scooter until 3 a.m. I thought for sure it would be stolen. We walked back to our bikes and they were both there and the last ones left in the pitch dark.

I knew of course if it ever got stolen, it would be my own fault it was my risk. In Vancouver, bikes get stolen within seconds I would never think twice about leaving it unlocked unless I was in a farming community.

The day it finally happened

I was playing at my weekly football game at Goal Academy and as usual, I did not lock my bicycle in the parking lot among many bikes and scooters.

After the game, I went out and couldn’t find my bicycle after looking around the whole lot. Some people thought someone might have accidentally taken mine by mistake.

Of course when someone takes your bike, it’s long gone and I can’t imagine trying to attempt to find it.

Chan, the owner of the small bar and the football field, surprisingly had a video camera tied to his phone and he played back the time I arrived and monitored to see who took my bike.

But the camera was only black and white and there were so many people in the shot, I wouldn’t have been able to spot who took it in the footage. Chan said, “I’ll investigate for you.”

I laughed and said, “No it’s ok please don’t waste your time there’s no way we can get back the bike. Thanks so much though for looking.”

After we looked at the footage for about 20 minutes, we saw a kid take a bicycle, but I couldn’t tell for sure if it was mine. He said, “I know that kid, I’ve seen him hanging around here.”

I left Chan my phone number in case anything turned up, but I was doubtful.

So I thanked him for his time and started making arrangements to buy another street bicycle.

The next morning, I wake up and see a text from Chan. “Hey, I got your bike. It’s in my office, come pick it up anytime.”

Shocked, I asked him, “What? How the hell did you find it?” He said, “I’m FBI.” And I replied, “No you’re way better in FBI. No police in Vancouver could track down a bike.”

When I went back to his bar, he wheeled out my bicycle and asked him again how the hell he found it. He said, “After you left, I spent three hours looking for your bike. I would have felt so guilty if it got taken on my property.

I asked some people if they knew that kid around the market and one guy recognized the kid and knew where he lived. So I found the kid and took back the bicycle.”

I never met Chan formally until that night and couldn’t believe he spent that much time looking for my bike. I told him I’d bring people to his place or treat him a dinner sometime and said, “No don’t worry about it I would have felt bad if something happened.”