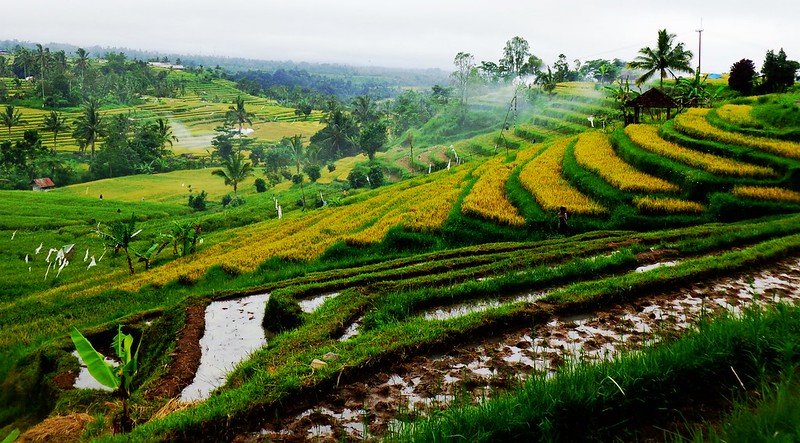 While I was on Bali island in Indonesia, one of 13,466 islands that make up the country, my friend and I rode our mottos to see the unique Jatiluwih rice paddies, a popular place for foreign visitors. Jati means “really” and luwih means “beautiful.” The rice fields were dug in terraces on the slope of Mount Batukaru around the middle of Bali. When the rice almost reaches harvest time, the colour often varies between green, and dark yellow. 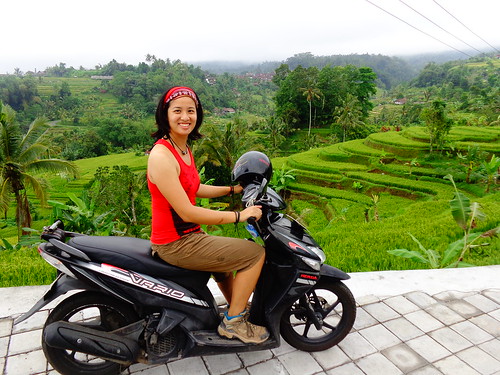 Indonesia has one of the most stunning landscape and it’s why the motto rides are the best way to explore the country in my opinion. The entrance fee was no more than $2.50 US, about the same price as most temples and sights. Compared to Europe, the value for these places around Asia are much more  beautiful and unique. The Jatiluwih rice fields are definitely worth a visit. 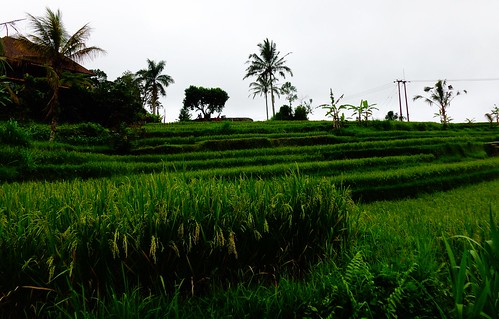 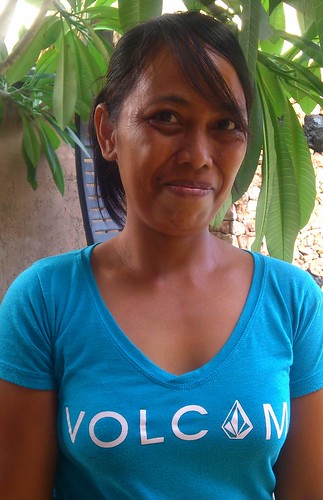 I was very happy to meet Nyomen, a staff member at the villa my friend was staying at in Bali, Indonesia. Every time we passed her, she greeted us with the most genuine and warm smile. She doesn’t speak much English and I don’t speak much Indonesian, but I can feel the warmness of her personality. If she didn’t see us for a few days, she would run up and give us a hug whenever we came back.

Nyomen has worked in three villas and is also a mother of two, one of whom is not her biological child, but she so generously took into her family. She grew up in Bali with six other brothers and sisters and now is busy taking care of the family after her work shift is over.

Nyomen’s lifestyle, modesty and unconditional love for her family is typical of many women I have met across Asia. She wakes up early to make breakfast for the children and does a lot of shopping. Husband doesn’t cook but if he has a day off he will go fishing and bring fish back home.

Nyomen makes these beautiful bracelets and sells them. I bought two as a souvenir of her wonderful and generous personality.

Marriage is highly valued across Asia and if people are not married by a certain age, often between 20 to 30, then many people act like it’s the end of the world for you and you have not fulfilled your ultimate mission in life. The families of the bride and groom have to agree with the marriage.

I was curious and asked Nyomen what the common age is for people to marry and she said girls can marry as young as 20 years old and 24 to 27 years old for boys. Sometimes if kids don’t have a job they marry instead.

In today’s Western dating culture, there is so much gaming involved, playing hard to get and often acting like a bad boy/bad girl to attract a partner. So I found the simplicity and genuine affection in Nyomen’s story of how she met her husband very sweet and a great of example of old school romance.

Nyomen’s husband came from the same village as her and they met every day. She said, “We spent a lot of time together and one day my husband said he fell in love with me.” They were not in a relationship for a long time before they got married. She was 20 years old at the time and he was 25 and is now working at a hotel.

I asked her if she wants her kids to marry early and she said, “No, I want my children to go to university, have a good job and then marry. In Bali it’s expensive so I want my kids to be successful and I can help my kids go to university.”

Over the next few weeks I will start posting detailed costs of my time in Indonesia, Laos, Philippines, Taiwan, Cambodia and Thailand. What I spent for 6 weeks in Europe lasted me 10 months in Asia. I wasn’t on a specific budget necessarily and I didn’t hold back on anything I wanted to do including doing my diving license, mutli-day tours, and doing a motorcycling trip.

These places could be done for even cheaper than what I spent because I also treated my friends out regularly and bought extra ingredients to cook for them. My three weeks in Indonesia would have been $371 US if I didn’t do the diving license.

All of the prices will be in US dollars. At the time I was in Indonesia, the exchange rate was on average $1 US=11,500 rupiah.