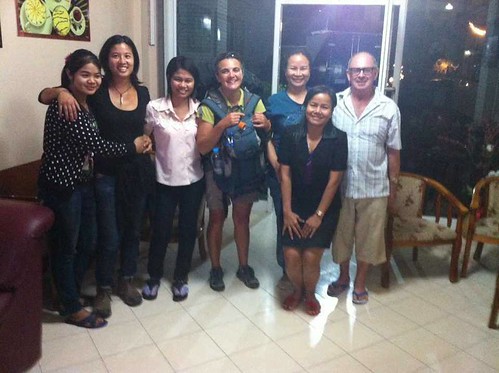 The wonderful people who kept us company for the whole day in Surin.

I was looking forward to the Full Moon Party in Koh Pagnan island in Thailand for two months and it was the only fixed plan I had in January. Everything else was up in the air. 10,000 to 30,000 people go the party every month to dance the night away and enjoy themselves however they please. I was more attracted to the event for the electronic music and dancing on the beach, which is hard to do in countries with many regulations like Canada.

Because I just got my open water diving license in Bali, I wanted to go to one of the best diving sites in the world, which is Surin Island south of Thailand. So I thought I could go there for a few days to dive then head to Koh Pagnan afterward.

I booked my accommodation for three nights on Koh Pagnan ahead of time because it was going to be busy and I looked online on how to Surin Island and tried to find the bus and ferry ticket, which was not as easy as it seemed. 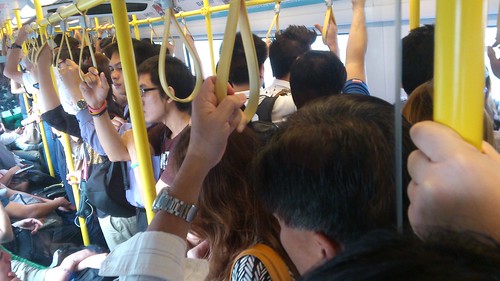 Rush hour on the BTS skytrain in Bangkok

After the first two hours of being on public transit, I finally got to the bus terminal to try and get the ticket because you can’t book it online. But at the first bus station when I asked for Surin, he told me I had to go to Mo Chit bus station an hour and a half away to get to the island, which wasn’t on the website. But the site information could have been outdated for all I knew.

Five hours after navigating through the organized chaos city that is Bangkok, I finally get to Mo Chit. I asked the info booth how to get to Surin, got our tickets and waited for the overnight bus to take us to our first stop. The website I read said from the first island, you can take a 7:00 a.m. ferry to get to another island first before getting to Surin Island.

We left at 8:00 p.m. and arrived at 5:00 a.m. to Surin. So when I asked someone where the ferry was they gestured that there was no ferry in the area. When my friend pulled out the map to indicate where we wanted to go, we found out we went eight hours in the wrong direction! We headed north to the city of Surin, which is different than the island of Surin. Who knew there would be two things named Surin? Someone told me next time I should ask for “Koh Surin,” which means Surin Island. Mental note.

We could have gone back to the south or just head up to Chiang Mai, which we were planning to do after the Full Moon Party. I said, “Well we’re already this far, let’s take the bus to Chiang Mai.” Unlucky for us, the earlier buses were full so we had to wait 14 hours for the next bus, which was another 14-hour ride to Chiang Mai.

We looked for a coffee shop with Wi-Fi to stay at the whole day. Thankfully the first cafe’s internet didn’t work otherwise we wouldn’t have met the wonderful people who spent time with us at another coffee shop.

I found out that the 21-year old woman staff member was originally from Cambodia, which instantly made me homesick from my Asian home Siem Reap. I spoke a bit of Khmer (Cambodian language) with her, and she was so surprised. She came to Thailand to work, which is what many Cambodians do, and works seven days a week at the shop. She had the most adorable laugh and she so reminded me of the wonderful smile and friendliness of many Cambodians I met while I was in the country for eight months.

We saw a mix of older Western men and local Thai women, whom we said hello to and we started chatting casually here and there. I learned from them that most people in Surin speak Khmer partly because they are so close to the country.

I was surprised how long they hung around the coffee shop, but one of the women, Sudjai, was friends with the owner. They told us a bit about their family, their work and many other random things.

Our highlight of the day was when they offered to drive us to the night market so we left our stuff at the coffee shop. It was nice to have a mini tour of the city. I asked myself, “When in Vancouver and other cities could you feel comfortable leaving your bags at a coffee shop and have people offer you a ride for dinner after meeting them after just a few hours?”

We all grabbed some food and brought it back to the coffee shop to eat together. They stayed with us from the morning until our bus came at 8:00 p.m. Before we left, Sudjai said, “Next time you’re in Surin, you can visit our family.” I am chatting on Facebook with Sudjai now and she said again, “So when you visit Thailand next time you can stay with us for free.” I told her next time we visit Thailand and have time, we will go to Surin on purpose and include a visit to them as part of our trip.

It’s so beautiful that around many parts of Asia that I’ve been to, I can easily talk to people and find people to connect with wherever I go.

We then continued on our journey to Chiang Mai and the northern mountains, which led to my most memorable days in Thailand. I will tell you in my next post how I ended up watching the full moon during a silent sitting meditation with a group of world travelers and Thai owner of an organic vegetarian farm instead of the originally planned Full Moon Party.

A fixed destination can distract you from the path you were meant to take.