Since I’ve been in Cambodia for a year and a half, one of the biggest differences I notice between Cambodian youth and those in Western countries is the level of consideration they have for other people and responsibility in the home.

I usually take a nap at my Cambodian colleagues’ house. When I arrived at her house two days ago, her energetic and playful seven-year-old sister who was the only person at home. She was eating on a bench and I just started to lie down on the best beside her. I heard her immediately go into her house, get me a pillow and ran to get another chair for herself so I could sleep on the whole bench. I was very impressed.

Today I also went to an NGO school located 12 km outside of the Siem Reap city-centre. I was prepared to sit on the floor with my computer and as soon as I walked in the room, a 12-year-old girl ran out to get me not one, but two chairs. She said, “One for you and one for your computer.”

I run into a lot of Western expats, whether I want to or not, in town and many would barely have the consideration to get up to get you a chair or do something to help a new visitor or a guest. I was very impressed with my friend’s sister who is much more polite than most Western adults I’ve come across in Asia.

When tourists or expats visit people in rural villages, they’re often surprised how well-behaved many of the children are. Many don’t have a chance to live out a full childhood because they have to help their parents clean the house, pick up their siblings from school, cook around their school schedule, if they even go to school at all.

I keep learning to shut up when I complain about working long hours at times because some Cambodian friends tell me that they wake up at 6:00 a.m. to drop their sister to school before starting their 8-hour work day then going to university for three hours where their teacher may or may not show up because they drank too much the night before. They don’t tell me this to make me feel bad; my friends are just open about their lives. I’ve heard too many “poor” me stories from expats who didn’t get the perfect massage or not having air conditioning.

When I visit my friends’ hometowns in the villages, I’ve seen 11-year-olds who know how to cut and clean fish, young kids helping set up the tables before a meal and kids sweeping and watering plants happily at their schools. They are extremely modest and rarely ask for much from their family, mostly because they can’t. But they know how to use their imaginations and play well with each other. 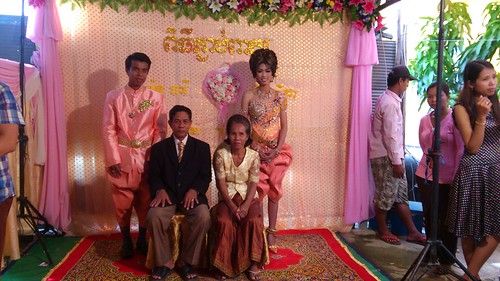 My friend Lida (right standing up) and her fiancé.

I wanted to take a break from moving around in Laos in October and was feeling a bit homesick. So I came back to Siem Reap for almost three weeks to just be in one place and spend time with friends.

I’m glad I came back the time that I did because within two days of my return, my friend invited me to her engagement party in Phnom Penh. I was excited because it was also the first engagement party I have ever been to.

Traditions are very important among Cambodian families and the man usually asks permission to the bride’s family. I’ve learned recently that there is a dowry that a man pays to the bride’s family that goes to the wedding and the amount is generally $5,000 USD. Not every family does an engagement party and it’s up to them if they want it to be large or small. 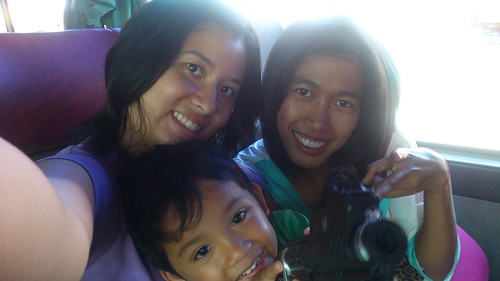 My friend and I took the bus together and it was fun talking and play with this boy who had a mullet! It’s always fun traveling with locals.

It was really nice being able to stay at my friend’s house and meet her family for the first time. I got a first hand look at all the preparation that goes on. I tried to help out where I could but when it came to things like preparing the fruit baskets and offerings, I really would have slowed down the process. 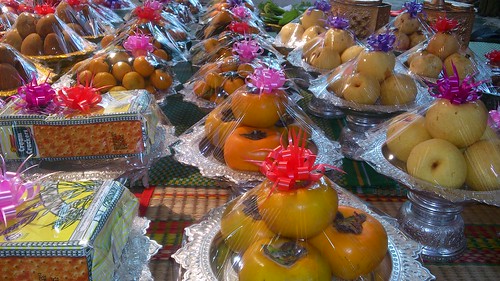 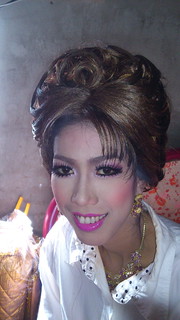 Half way through the preparation process

My friend Lida got up at 5 a.m. to start putting on her makeup and do her hair in traditional Cambodian style. Brides-to-be usually put on a lot of makeup, including whitening lotion, and their hair is very stylized. I asked my friends why the brides put on so much makeup because they already look so beautiful naturally. She told me it’s because the bride has to stand out and look different than everyone else. I woke up at 5:00 a.m. too to watch the whole process.

Around 10:00 a.m., many of the elder people began arriving. It didn’t seem like there was an official start time. The ceremony began when everyone was ready. Everyone took a fruit basket and we walked outside the house about 200 m away in two lines. There were two kids at the front, a young boy and a young girl, who led the line. I took a basket and each of us took a turn to make the offering for the bride and groom.

Once the offering was complete, the elders spoke to each other with a microphone for awhile and gave advice to the couple. My friend told me there is no rehearsal for the ceremony, they’re simply guided by the elders. There were times she and her fiance looked confused about what to do next.

After the first part of the ceremony was over mid-day, I was exhausted even after I wasn’t involved much with the prep. I couldn’t imagine how my friend felt or how she will stay up until late night. 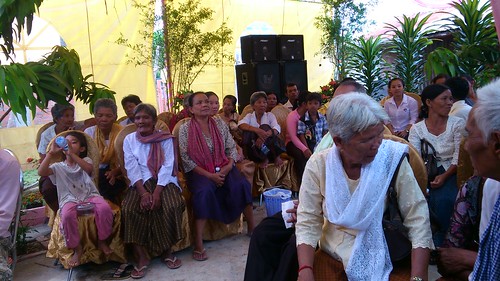 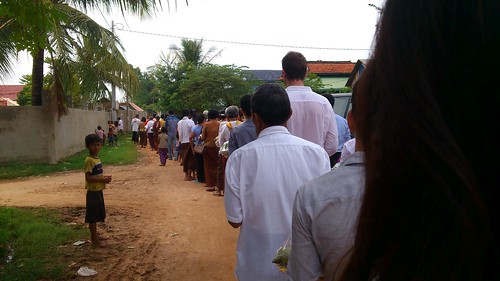 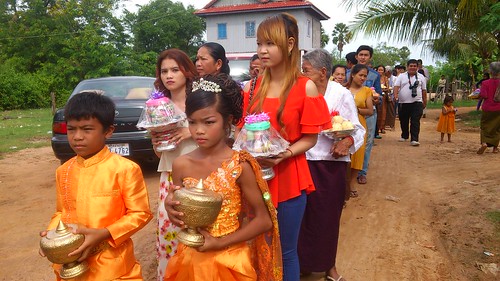 Lining up to walk to the bride’s house to make the fruit offerings. 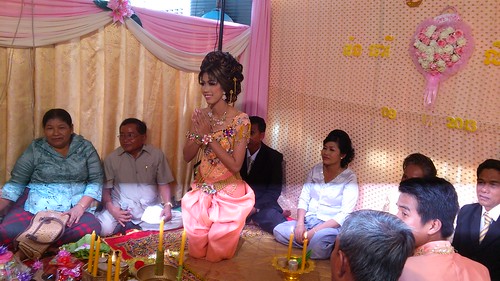 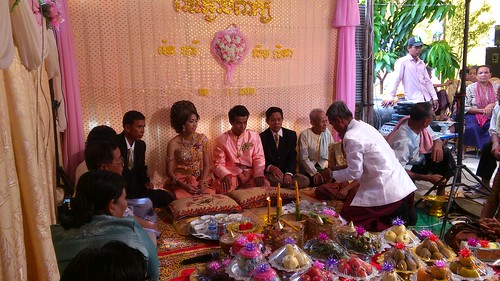 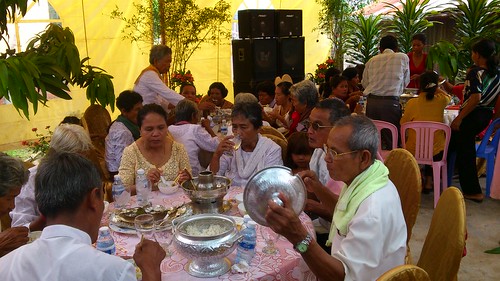 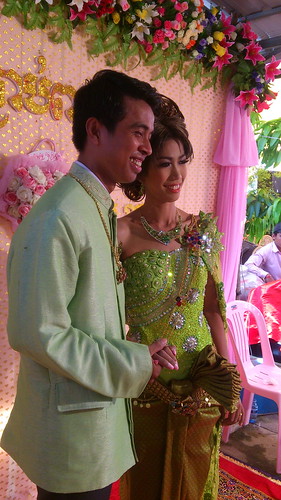 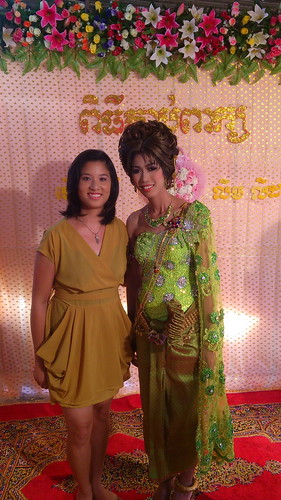 After I took a rest, I wandered outside and there weren’t many people I could speak with because my Khmer is not very good. Then I heard a young girl scream, “Meecha!”, which is my Cambodian nickname that means fried noodle.  I love the kids around Cambodia because even when there is a language barrier, they will always make an effort to talk, laugh or play games with people they meet.

These kids really made my weekend extra memorable, we played games for hours and ended up dancing with them most of the night. Earlier in the day, I brought some paper and pens so I could see how they wrote their names or what they could draw. I was really impressed with what they did. 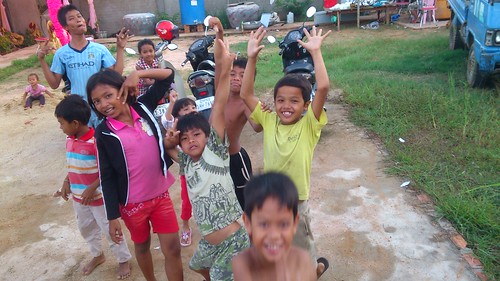 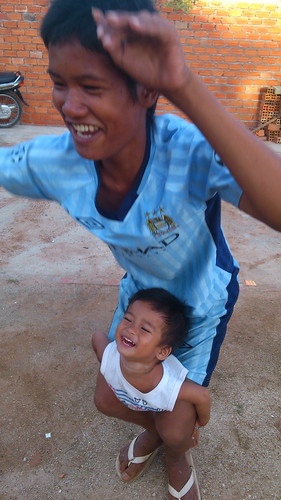 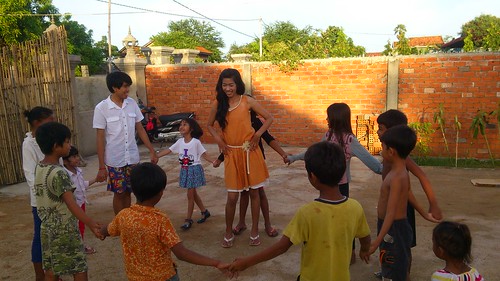 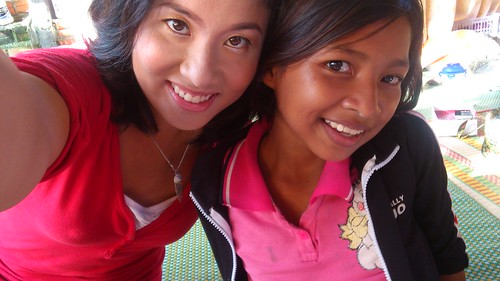 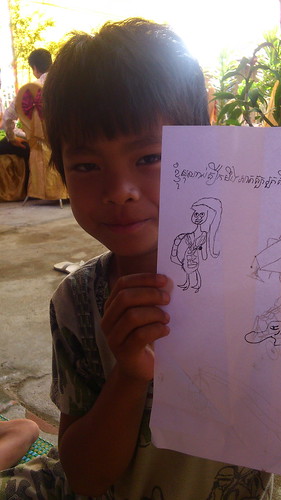 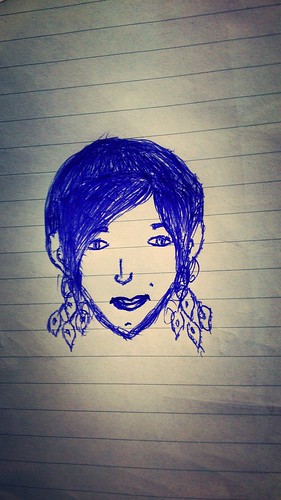 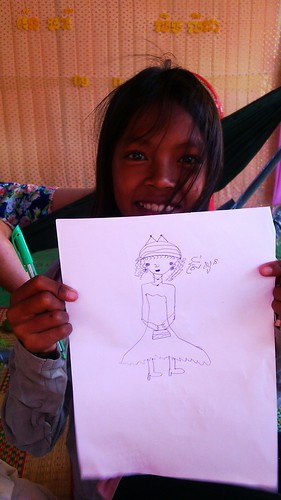 At Cambodian engagement parties and weddings, in addition to food, people also have as much beer as they want. So most of the adults are drinking throughout the night. After dinner, there is music for people to dance to throughout the night. I mostly danced with the kids because they had the most energy.

At the end of the night, I met one girl who was 12 and it was really cute she was sad that I was leaving the next morning. I hope I see these kids again at my friend’s wedding on March 9, 2014.